An update from astrology.com:

Enough review -- take action! As Mercury turns direct in Scorpio on November 17, it's time to incorporate everything you've learned during this Mercury retrograde period, which began October 28. Hopefully, you’ve done your research and are ready to forge ahead. Independent Uranus turns direct on November 19, bringing change and a desire to be totally true to yourself. Just what is that magical mixture that makes you unique? As you are contemplating that, Jupiter enters philosophical and travel-oriented Sagittarius on November 23 for the first time in 12 years. A new course must be mapped out -- are you ready?

Posted by tate hallaway at 11:24 AM No comments: 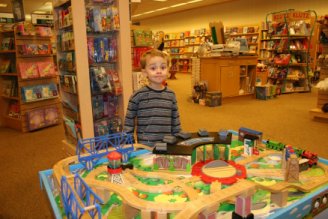 Here are a few cute pictures of Mason(and Shawn) at the Rockford Barnes & Noble. These pictures were taken by our friends Besty and Warren Urbik. Isn't Mason just darling? 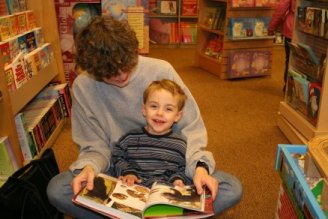 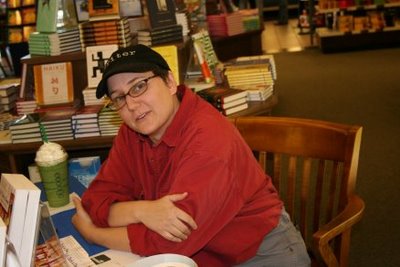 I desperately want to unequivocally support local, independent bookstores. Certainly, I go out of my way to spend time and money at Uncle Hugo’s, which is not only independent and bricks and mortar, but is also one of a vanishing breed – the science fiction and fantasy specialty store. I also try to push customers their way. For a long time they were the only store in the nation that sold new copies of the out-of-print books by other me.

Uncle Hugo’s is a writer’s dream. They’ve always ordered a lot of my books, hand sold them to customers with similar interests, they rarely send back “returns,” and they’re generally warmly disposed when I call begging for signing time when a new book’s release date rolls around. They’ve supported me despite a career change, and has always had a very broad definition of what constitutes SF/F and has always carried a number of paranormal romantic titles.

For their sake, I would wish all big box bookstores to be swallowed by the monster from the deep (or at least suffer tragic, mortally wounding sales.)

Then I go to somewhere like Rockford, Illinois, and have a fantastic signing at a --gasp-- Barnes & Noble, and suddenly I don’t know how to feel about all this.

I don’t think I sold particularly extraordinarily at Rockford. I probably sold a half dozen books (possibly a few more), but there was a surprising amount of foot traffic considering that this store was a stand-alone building in a big box store oasis that had more parking lots than trees. Because there were people wandering around, I was able to sell a few books based on my aggressive business acumen (which is to say I harassed someone into buying a copy of TD&D). I also handed out a fist-full of postcards advertising the next book, telling potential customers that the postcards were FREE, and if they decided they wanted the book after all, they could always come back and pick up a copy I’d signed. Hopefully, that sort low-pressure of approach will move even more books. Who knows? More to the point, B&N had ordered a fair number of TD&D and not only had signs all over the store announcing my presence, but they also had one of their friendlier staff walking around showing off copies of my books and telling people they had a once-in-a-life-time opportunity to meet a real, live romance author.

Plus, they bought me coffee.

It’s hard to hate people who buy you coffee.

I will never, ever abandon my local, independent bookstores, but there are certain advantages to these large box bookstores. You might find this counterintuitive, but I have had a lot easier time booking signings at remote venues by contacting big boxes. Once, when Shawn and I knew we were going to be traveling to Phoenix, Arizona, I tried like the devil to get any independent bookstore to give me a signing. I called several months in advance, but got bumpkin for a response. The most famous independent bookstore in Phoenix, Tattered Cover, explained to me that I could have a signing, IF I was willing to pay them. “Book signings, you understand,” the manager sniffed, “don’t net us any profit. If you want to rent space from us, you can. Fifty bucks an hour.”

I blanched. No way was I going to rent out a space in a book store that also promised absolutely no support in terms of publicity – It wasn’t even clear they’d order books for me. So, I gave up on the independents. I went on-line and searched for a B&N with a science fiction reading group. By chance, there was one in the Phoenix area, I called them and talked to their community relations person and had a signing scheduled by the end of a ten minute phone call.

That Phoenix signing was a big seller. I sold over sixteen books AND I met the reviewer who reviewed Other Me’s first novel for Romantic Times. The trip was a humongerous success.

And they bought me coffee.

Did I mention the free caffeine?