Once again, Amazon.com is running a "Bargain Price" on Tall, Dark & Dead, so if you're like me and you think that it's outrageous that anyone charges $14.00 for a book, now's your time to order. TDD is available for only $5.49. The Barnes & Nobel sale was over very quickly, so dare I say it? Act now!

I should warn y'all, though... I ordered a bunch of books when B&N had their sale and they were clearly books that were marked to be returned by the bookstores. They all had a black marker line on the bottom of each book, so they no longer would qualify as "new." However, given THEIR price (B&N was giving the books away at 4.00 a piece, which is way cheaper than my publisher sells them to me), I was okay with that. I've never ordered these bargain price books from Amazon.com, but given that they don't have any brick and mortar stores that would be returning books, I suspect they won't be marked up.

Also, any authors, editors, booksellers, other industry professionals or people with an insider track on the business out there reading this blog? Because I'm wondering why Tall, Dark & Dead is getting such discounts from the booksellers. Is this a good thing? I mean, I suspect it is, given that they are trying to sell them and not, say, returning them to the publisher. But... this is the third time the book has been deeply, deeply discounted (first at Amazon.com, then B&N, and now Amazon is doing it again.)

Thanks to my previous history, I'm terribly gun-shy about things like this, so if anyone has information that would assuage my freakage, I could really use it.

Sometimes I wonder how anyone ever lasts in this business.

My alter-ego and I did a podcast with Shawn Ferrell that is available at http://adventuresinscifipublishing.com/ today. Go check it out, it's free!
Posted by tate hallaway at 10:52 AM 2 comments:

...working on revisions, but instead I stumbled across the Ghost Reseach Society's Ghost Photographs.

A lot of the pictures are pretty spooky, but this one in particular scares me.

Posted by tate hallaway at 8:20 PM No comments:

Mason and I continue to play the license plate game, even though we have not YET seen West Virginia. Today, we saw to brand new ones (yes, there are still more to see). First, just outside our usual coffee shop, we saw the Creek Nation (Okalahoma Native American) and then at the Minnesota Historical Society on our way to see the Capitol Wind Ensemble at Rice Park, we saw a diplomatic plate. Alas, I did not realize that I needed to write down the first letters so that I could identify what country the consul was from so that's a mystery. 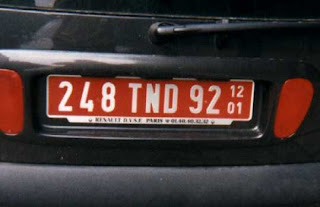 And, the other day I saw what probably this one... a temporary tourist plate from France. Mason's magic is strong indeed.

Posted by tate hallaway at 2:46 PM No comments: