Today is the official release day of the last book in the Garnet Lacey series, HONEYMOON OF THE DEAD.

I have some mixed feelings about this book, because I'd just finished the final draft of the novel when I found out that it would be the last. I had always hoped that Garnet would be my "never ending" series, and had originally written in some plot points that I intended to pull out as the grist for the events of the next book. Thus, the book is not the nice, tidy ending I might have written had I known it would be the last.

For instance, there would have been a lot more Daniel Parrish had I known. Heck, the whole "Scooby gang" would have shown up a lot earlier.

However, I would LOVE for this book to go out with a bang, so, if you're so inclined, please consider purchasing this book in its first week on the shelf.

Beltane in the Twin Cities 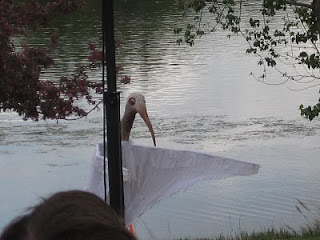 Of course, nobody officially says that's what it is, but, for the past thirty-six years, a Minneapolis-based theatre troupe called In the Heart of the Beast puts on a parade and free performance in Powderhorn Park on the Sunday closest to May 1st that has grown into a celebration of epic proportions.

A number of my science fiction/fantasy writer friends have talked about trying to write about this celebration in fiction. To a person, we've agreed that it would be almost impossible, if only because some of the most awesome parts of the pageant are, in point of fact, ACTUALLY magical. Trying to add fictional magic into the mix does something to the story to render it.... lifeless. Plus, there's the challenge of trying to describe this progressive "morality play" in a way that honors its awesome, without making it seem stupid or over-the-top. 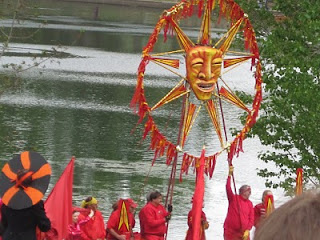 Theatre, of course, has it's own magic. The puppet troupe is well aware of that and always uses that at some point in the play. This year they transformed The People's baggage into the roaring tiger of activism (see how stupid it sounds out loud? It brought a tear to my eye live.) But one part of the play that doesn't change is that the sun rides a boat across the lake in the middle of Powderhorn park and comes to the western shore. When it arrives, even on a cloudy day like it was yesterday, the real sun always makes an appearance. Yeah, you don't believe me. But there was a group behind Mason and I on the hill who said, in an almost bored by it tone, "Happens every year." How could I write about that and have you believe it? It is, in its own way, a miracle of the Goddess witnesses year after year, by tens of thousands of Twin Citians. But, if I wrote it in a book, you'd think THAT was the part I made up.

Here is a picture of the Goddess. Okay, so she's officially called "The Tree of Life," but her skirt is the May pole. 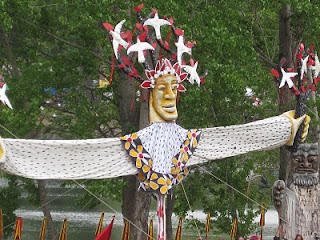 Posted by tate hallaway at 8:44 AM No comments: