Date Night for the Vampire Princess

I won't tell you with who Ana is going on a date (because it's kind of a spoiler for Book #3), but they're headed out to Kurdish food. So I'm writing about Babani's Restaurant in downtown St. Paul:

Hmmm, now all of a sudden I'm hungry for lunch!

Posted by tate hallaway at 12:42 PM No comments:

Sorry to be all about my alter-ego lately, but I (as her) am the featured "Big Idea" over at John Scalzi's enormously popular Whatever Blog. Ironically, I so deeply nervous about this post that I kind of hope no one reads it -- though that kind of defeats the whole point....

I am hoping to continue to blog (with pictures!) about the places around St. Paul that are featured in my Ana books. Just last night I wrote a brief scene that happened outside of this St. Paul landmark: 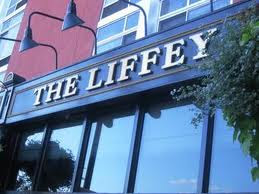 Posted by tate hallaway at 10:50 AM No comments: 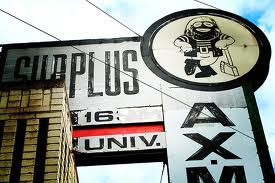 One of my seekrit agendas when I proposed the vampire princess of St. Paul books, was to feature various cool locations around St. Paul. Minneapolis has been written about extensively. When I was in college, I devoured Emma Bull's WAR FOR THE OAKS. The book was especially cool because I could drive past places where events in the novel took place. I've always wanted to do that with much much less celebrated St. Paul.

I live not far from Ax Man on University Avenue. Despite what my friend Ember used to think, they don't sell axes there -- not the wood chopping kind nor the musical variety. They just sell... weird stuff. It's actually very difficult to explain what you might find inside Ax Man. The University Avenue store, for instance has an iron lung and paper clips and tires and... weird stuff. It's whatever they get that's been remaindered or "surplus." In other words cool junk.

Unfortunately, Ana doesn't go IN to Ax Man in the current novel. It makes an appearance as a landmark to another University Avenue destination.... Porky's. 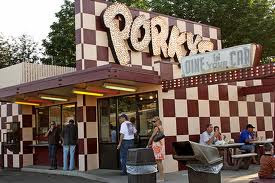 Posted by tate hallaway at 9:57 AM No comments: