You know, if the universe rewarded people who wrote a LOT of fictional content, I'm fairly sure I'd be eligible for SOMETHING. :-)

Today, on offer, is the second chapter of the project that I'm doing with my fellow writer Rachel Gold/Calish and the artists Mandie Brasington and Alexis Cooke, the School for Wayward Demons and Misfit Witches. This chapter is called "Lily Has No Choice: entertheunseen.com/lily-has-no-choice/ and introduces demon-hunter, tracker extraordinary (retired) Lily, who is a character from Rachel Calish's book The Demon Abraxas. (There might be other cameos too....) :-)
Posted by tate hallaway at 9:58 AM No comments:

I have a lot to announce today. As usual, I have updated my work-in-progress on Wattpad. In this installment, the werewolves are getting restless and the demons discuss fate vs. freewill. www.wattpad.com/73575290-unjust-cause-part-24-demons-and-fate

A number of people have been curious about how Wattpad has been working for me. I have to say that it's gotten better. At first, I have to admit to being disappointed by the number of people reading. I'd had higher hopes that Tate's name would draw a bigger initial crowd. But, now that I'm fairly established (this is my 24th installment, which means there's AT LEAST 24,000 words up--I believe there's probably closer to 30,000 or 35,000 because my first few installments ran longer that a thousand words,) I'm pleased with the number of hits I'm getting. People seem to be slowly continuing to find me, too. I've been keeping up better on FB and Twitter and Tate's blog, so I think that's helped when people go looking.

At any rate, I still think that it's not a perfect model. I wish you didn't have to log-in to leave comments or kudos, and I wish more people were willing to critique me, like my colleagues do on AO3 with my fan work. That being said, Wattpad works really well for me and my needs, however. As I've said, what I need most of all is a reason to keep putting words on the page, and Wattpad is making me do it weekly. And I'm getting just enough feedback to make the whole thing seem worthwhile.

My other big announcement today is that my friend Rachel and I are launching a website/serial novel WITH ILLUSTRATIONS by artists Mandie Brasington and Alexis Cooke. The main site is here: entertheunseen.com and you can read the first installment here: http://entertheunseen.com/a-very-small-heist-of-epic-implications-01-01/. 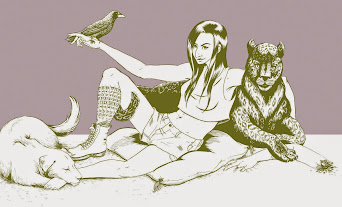 So... this is another grand experiment. If you go to the website, you can see that you can follow us on Facebook and Tumblr. We've also put up a tip jar.... something I've never tried before. We're also going to be going on a fairly aggressive publishing schedule: Tuesdays, Thursdays and Saturdays--though Saturday may be bonus content like more art or a podcast of the previous chapters.

The story is going to follow four characters, an ensemble cast. Rachel and I wrote a lot of the chapters together, but ostensibly we've divided the characters between us. She had Theo, a thief and a shapeshifter, pictured above with some of the forms she can transform into. She's also got Kitty, a half-demon with mommy issues. I'm writing Gabe, a lost soul who can see things other people can't... 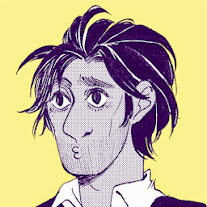 And Erin, a very special demon-spawn who has had an insanely awful life....

Anyway, it's been a very interesting process to work not only with a collaborative writer, but also with artists.

Generally, though, the site is new and probably has some bugs yet. So, if you go there and you see a problem or just have general comments or complaints, PLEASE LET ME KNOW. I'd like to make this experience as pleasant and intuitive as possible.

Okay, that's the general news! Have a great Tuesday!
Posted by tate hallaway at 9:48 AM No comments: