Review of Dead If I Do 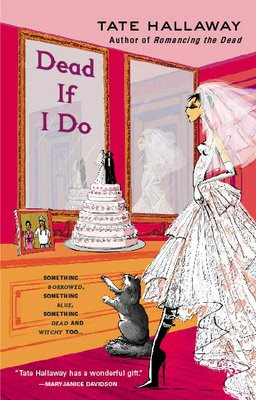 Another interruption, but here's a really awesome review of Dead if I Do from Fang-tastic Books: Review.

I'm so glad that many reviewers are finding my books for the first time (I think I probably need to thank my hardworking publicist.)

Posted by tate hallaway at 10:38 AM No comments:

I'm going to interrupt my own "class" on getting started to forward this lovely tid-bit... an on-line class about men. (My favorite part? It's taught by a woman!)

**Permission to forward granted and encouraged**

Yosemite Romance Writers is proud to present their online workshop for June.

Do you wish you had a better understanding of men? Now is your chance to improve your real-life relationships with men and enhance your male characters all through taking the same course. In the month-long online class, you will learn how the male brain and hormones makes a man think, feel, and behave, especially in relationships. We will also discuss how men are portrayed in romance novels versus how men are in real life.

About the instructor: Dr. Debra Holland

Debra Holland, Ph.D., is a popular psycho therapist, consultant, and speaker on the topics of communication skills, relationships, stress and trauma, and dealing with difficult people. In this class, Dr. Debra will considerably expand on the workshop she has given at the 2001 National RWA Conference and around the country to various RWA chapters and conferences. Although this class is geared to writers, non-writers will also find the class helpful in improving their relationships with men.

Please click the Pay Now button and follow the instructions for Paypal. You will receive a confirmation from us once your payment is received.

Thank you for considering our workshops!!

Posted by tate hallaway at 10:19 AM No comments:

Getting Started the Tate Hallaway Way

I logged into Facebook this morning and discovered a couple of letters from readers in my in-box. One really nice one came from Debbie D. who asked me if I had any advice for an aspiring writer about the process of writing and getting published. I told her it was probably more complicated an a quickie email reply and promised to do a series of blogs about it here... so, here's the first.

I don't know how far along Debbie is in her process. Maybe she's got a book written and doesn't know where to go with it, or perhaps she's just thinking it'd be cool to be a writer someday. My plan is to start at the very beginning and build from there.

So let's say, you're just thinking maybe you'd like to start writing a book and you're not even sure how to begin. First of all, there's no right or wrong way to write a book. Lots of people have different processes and all of them are valid. I'm going to detail my own, since it's what I know. But, if you find yourself doing something differently, don't worry. Probably someone somewhere has done it the same way as you, and really, all that matters when you're getting started is that you get to THE END.

For me (and you might not believe this,) the hardest part is often coming up with an idea. Of course, now that I've established Garnet, Sebastian, William and the rest of the gang, coming up with scenarios wherein their lives get complicated is relatively easy, but when you're first staring at a blank page, it's hard.

Maybe you've got a cool character or two or three, but you find yourself still not getting anywhere because when you write about them nothing really seems to happen.

I have the same tendency. When I first started writing all I did was write really boring soap operas. People would get together and talk. Okay, the talk might be interesting (to me, at least,) but there wasn't a lot going on.

After taking a class in writing (which, btw, is one thing I recommend to every starting writer,) I realized my problem.

I didn't want to hurt anybody.

That's how you get the plot going. The place you start is that moment that everything changes for your character, the moment when everything goes to hell (and, as a bonus in writing urban fantasy, you can do that literally if you want.)

Of course, I'm assuming you have characters to do this to... but, again, I'm going with my own process. Usually I have some idea of WHO I want to play with, just not how to play. I'll cover inventing characters from scratch tomorrow. Today, your assignment is: If you have a character or two in your head, ask yourself this question: What is the worst thing that could happen to them?

Get out a notebook and write down two or three answers. Think about the answers for a while. Are you being honest? Too nice? Think about it again: what would make my characters desperate? What would ask them to CHANGE? How far would they go to make things right again?

You don't have to do anything with it yet, but just start imagining worst case scenarios.

I know it's not possible for a lot of you folks out there to attend a live reading of my work, especially since I'm not...ehm,... one of those authors that Penguin sends off on book tour. So here's something just for you! As part of the podcast I did with Vampires, Witches and Geeks, I "taped" a reading of the first chapter of DEAD IF I DO. Check it out!! Tate Hallaway reads from Dead If I Do

Posted by tate hallaway at 3:00 PM No comments: