No, Don't Pull Your Punches, Really...

I don't really feel like writing today, especially since I read one of the WORST (as in harshest) reviews of ALMOST TO DIE FOR this morning on Red House Books. Check it out. I'm not saying it's unfair, it's just kind of brutal. It's never good, for instance, when the one thing the reviewer liked about the book is its cover. The one thing, in point of fact, I have zero control over.

I suppose it's better than saying they only liked the font... but wow. I think, too, one of the reasons that this review hit home for me is that, most of the time, I *know* when I've written a book that isn't my best. It's not something you're ever allowed to say out loud, and, you always kind of hope that no one else will notice. In fact, with ALMOST I've been quite taken aback by the fact that Publisher's Weekly liked this book enough to give it a starred review, when I personally believe EVERYTHING the reviewer at Red House had to say (before she said it.) I worked hard on the book, but I thought it was fairly deeply flawed from the beginning. And, you know, try as you might, not every book you write is going to be your best.

The Emperor, in case you wondered, has no clothes.

But, reading that first thing this morning kind of sucked the life out of my already fairly weak desire to work today. Alas.

Now don't feel compelled to tell me how awesome I am or run out and post "you're so wrong" over at Red House Books. Well, okay, you can tell me I'm awesome, but you know... don't harrass the reviewer. She's just expressing her honest opinion, which I actually respect. I post critical reviews of books by colleagues all the time. I think it's part of the deal I signed up for when I took on this writing gig.

It's all part of the life of a published writer. You get to take the good times (like finding out yesterday that ALMOST will be published in Chinese!) and you take the kicks in the teeth, too. I don't get mad when people honestly express their opinion of my work. It's sometimes demoralizing to read, but what can you do? If I could write a book that pleased everybody all of the time I'd be a best seller. 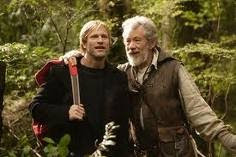 If I were a boy, I would totally date Sir Ian McKellen. Plus, it would be weirdly sexy to call him "sir" in bed. The reason I say this, however, is not just because I'm perverse, but also because I watched "Neverwas" last night via Netflix. What a surprisingly good film. It was not the "thriller" it was advertised to be, but Shawn and I decided it was kind of like a psychological drama, rather than a psychological thriller. It was also kind of a fantasy, but not.

I can see what it wasn't exactly a blockbuster.

But, I really ended up liking it tremendously. The story is about a Christopher Robin/Christopher Tolkien type character, whose father wrote a massively famous epic fantasy/children's story in which, like the first example, he was the star of. The father, unlike either of my two examples, suffers from manic depression and ultimately kills himself. The son blames himself and has distanced himself from his father's work (the "Neverwas" of the title) as well as devotes himself to the study of psychology. He ends up back at his hometown on the 25th anniversary of his father's suicide and worms his way into a job at the very mental health facility that had unsuccessfully treated his dad. The mystery/fantasy part comes in when it starts to seem as if there is a very REAL possibility that Neverwas was a real place... there even seems to be photographic evidence suggesting this... and that Ian McKellen's character is its king.

The movie has a lot of very moving, subtle moments. Shawn didn't trust the ending to satisfy. In fact, she was so convinced it was going to be utterly tragic that she got up and got ready for bed ten minutes from the end telling me to let her know if it was okay and she'd only watch it if it was.

The ending was way more than okay. It was borderline "feel good." It satisfied me deeply, if I were to be perfectly honest. It wasn't quite dramatic enough to be a tearjerker, but I think that might be another reason it wasn't a huge blockbuster. Subtle isn't usually what people go to the movies for.

Posted by tate hallaway at 12:23 PM No comments: 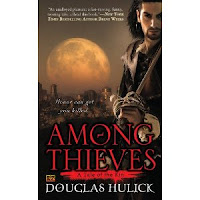 One of the best part of being in a writers' group, IMHO, is the free coffee. I should explain that one of the things that my writers' group does to assuage jealousy/envy is that we strongly encourage our members to buy a round of coffee/drinks at our coffee shop when there are successes, like publishing stories or books or whatever.

Doing that helps makes it much easier for me to feel really PROUD of my colleagues. To that end, I'd like to point you to my friend and fellow writer, Douglas Hulick's new debut, AMONG THIEVES, which is currently available for pre-order on Amazon.com, and which he talks about in this lovely interview at Fantasy Faction: Interview with Douglas Hulick.

If you like BFFWM (Big, Fat, Fantasy with Maps), or even if you don't, but love a good character study and a rip-roaring adventure go out and buy this book. No, buy six.