My partner found this article over at Boing-Boing, but it made me laugh out loud:

My favorite quote? "Once we found him juggling the hermit crabs..."

OMG. I bet they wish they'd gotten a shot of that for YouTube, eh?

Posted by tate hallaway at 12:28 PM No comments:

The House is a Mess

And I'm probably about to get up and take care of that... yeah, any moment now.

Posted by tate hallaway at 11:23 AM No comments:

My Life and Stuff

By chance today I was looking through my electronic copy of Gila Queen's Guide to Markets, and I stumbled across an anthology that's looking for Biblically themed horror. When I saw that, I was so excited, I nearly peed. Thing is, I've got this "trunk" story called "Jawbone of an Ass." It's a story I wrote many years ago specifically for a Biblical horror anthology, which for reasons yet unknown to me (the fools!), they passed on it.

I love this story, though. I chose the topic by thumbing through the Old Testament and randomly putting my finger down on a passage. No, surprise, it's a bit obscure. I ended up in a story I knew only a little about, that is Samson. Not the more famous one of Samson and Delilah, but of Samson's first wife, a woman from the rival tribe that really kind of gets screwed by Samson and his people. Anyway, I thought that story would make a great horror story if you made it from her perspective, rather than that of Samson's.

I also ended up making other changes. "Jawbone" is completely removed from ancient Israel. I thought it would have more modern resonnance if it were retold in a similar kind of religoius battleground, so I set it in 1980s Northern Ireland. Samson is now an IRA man (with God on his side) and the unnammed wife a Protestant.

And then her life just sort of unravels, as told in the Bible. I actually follow the scripture's plot (which, honestly, makes it that much more surreal) up to the point Samson ties a bunch of foxes together and lights their tails on fire -- I made that a dream. But, if I do say so myself, I always thought that successful or not in terms of a Biblical retelling, the story is one of the most poetic/literary/atmospheric stories I've ever written, and thus I've always wanted a bigger audience for it.

But try selling an obscure Biblical retelling to a mundane audience. Suffice to say, the only place it ever saw print was in the Wyrdsmith's chapbook. I came clean about that pub to the editor of this new anthology, but I hope he won't hold that against the story.

Cross your fingers. Wish me luck!

Posted by tate hallaway at 2:07 PM No comments:

Dead If I Do Available for Pre-Order

Just in time for Solstice! You can now pre-order your very own copy of DEAD IF I DO from Amazon.com. The book isn't out until May, but I have recently updated my web site so that you can read an excerpt of the first chapter. Try before you buy! Satisfaction guaranteed. 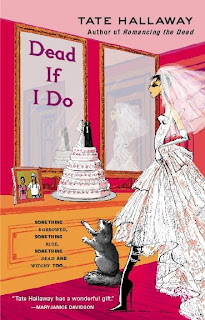 Posted by tate hallaway at 11:41 AM No comments:

Believe it or not, today is the twenty-third anniversary for my partner and me. We've been together more than half my life, as we met when I was seventeen (though I turned eighteeen that year. I'll save you the math: I'm 41.)

In other news, I have to laugh... in a sort of "ugh" sort of way. So, you know I'm taking all these courses via WitchSchool.com. Well, as part of my Tarot class I decided it would be smart to take a class in Kabballah. So, I'm taking "Introduction to the Tree of Life" or something like that. Anyway, the funny part is really only funny if you know that I used to write about Judeo-Christian religion despite being raised a secular humanist. I have tried and tried to "escape" the whole Judeo-Christian thing... though every time I take one of those "what religion are you?" quizes on Belief.net, I always end up as a Unitarian Universalist, despite TRYING to weigh my questions so I'll turn out a pagan/Wicca. Okay, so you know how I've been getting all "B"s on my witchy classes, well guess what?

I frigging Aced the Kabbalah test, without even using open book.

I can not escape. My brain is wired toward the whole Judeo-Christian thing. I even remembered which passage in the Bible/Torah the charoit of fire vision is in...

Posted by tate hallaway at 11:42 AM No comments: