Class Description: Peter Blood in Captain Blood, Long John Silver in Treasure Island, and Captain Jack Sparrow in Pirates of the Caribbean conjure up images of buried treasure, black schooners, wooden legs, eye patches, vibrant parrots, walking the plank, and swashbuckling swordsmen. Are these accurate portrayals of pirates? Some are, some aren't. This workshop explores the differences between the reality and mythology of piracy, and how writers can create believable characters that fit within historical parameters. We will look at why individuals became pirates, who's who on a pirate ship, the rules governing pirates, individuals who interacted with or encountered pirates, and other aspects of maritime life an author needs to know to write a pirate romance. Cindy enhances the workshop with a timeline and three resource bibliographies - maritime, storms at sea, and piracy. Workshop participants will have the opportunity to discuss 2 character profiles - one a major character, the other a minor character - and the type of ship the characters might use in the novel. At the end of the workshop, Cindy offers to provide a free edit of a chapter from participants' manuscripts involving pirates.

Bio: A retired librarian, Cindy Vallar began researching pirates in college while working on The Rebel and the Spy, a historical novel about Jean Laffite and the Battle of New Orleans. She is the Editor of Pirates and Privateers, a monthly column on the history of maritime piracy. She also reviews piratical and maritime fiction and non-fiction books, and maintains an annotated list of the best piracy and maritime sites on the web. She is the Associate Editor of Industry for Solander, the magazine of the Historical Novel Society, and writes the "Red Pencil" column where she profiles authors and compares a piece from their published novels with an early draft of that work. She also reviews for their journal, Historical Novels Review. She is a freelance editor and an editor for Wings Press. She belongs to the Historical Novel Society, the Texas Coalition of Authors, the Laffite Society, the Louisiana Historical Society, the National Maritime Historical Society, and the Red River Branch of Clan Cameron. She is the author of The Scottish Thistle, her debut historical novel about Scotland's Rising of 1745, and Odin's Stone, a romantic short story of how the Lord of the Isles settled the medieval feud between the MacKinnons and MacLeans on the Isle of Skye. She invites you to visit her award-winning web site, Thistles & Pirates (http://www.cindyvallar.com/), to learn more.

Your course presented what I as a writer wanted to know about the times-not just straight history. - Judith Hanes

Your course has been extraordinary to say the least. Thank you for the extensive information and feedback you've offered. - Kathleen Kirwood, His Fair Lady (Signet)

Your ability to put a lot of information in a succinct and entertaining fashion is truly amazing. - Elizabeth Bryant

I use a lot of what I learned in your class in pirate history presentations that I give for groups of seniors and at public libraries. - Claire Britton-Warren, Tales of the Seven Seas Pirate Reenactors

This has been one of the most awesome and informative courses I've ever taken. I feel like I could be a pirate. - Judy Soifer

Format: Course is conducted via Yahoo Groups email with lessons and Q&A

Posted by tate hallaway at 10:36 AM No comments: 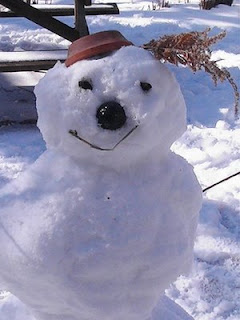 This is "Flo" (as in Ice Flo) that Mason and I built in the back yard today. The temperatures were reported to be in the 40s, and I can believe it. So the melty snow was perfect for building this fabulous snow lady. (She's got a GREAT hat, no?)

Then I pretty much did in my entire dolly domestic quotient by baking and decorating spring cookies today as well. 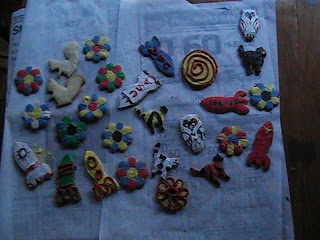 Posted by tate hallaway at 3:33 PM No comments:

I've really been feeling the various moon phases in terms of writing this year. Last night, I actually started really thinking about my book again and I realized, looking at the moon calendar in the bathroom, that it was NEW MOON. Weird, huh?

In other news, I swear Hotmail eats my really thoughtful responses to my WitchSchool Study Group questions. One of the mentors on the list asked if there was anything about Wicca that we could change, big or small, what would it be and why. (An excellent, thought-provoking question, IMHO). And as I was falling asleep last night I thought about what I wanted to say. I wrote this wonderful response this morning about how, in the beginning of Silver Ravenwolf's book TO STIR A MAGIC CAUDLRON she tells this story about a guy who phones her and is looking for help with somekind of magical / psychic attack. She asks him what daily devotions he's doing, and he replies with a stunned: uh, none. She's righteously indignant about this, but the story always left me wondering why. It's not like the spiritual aspects of Wicca are emphasized at all -- particularly in the "beginning" or introductory books. In fact, Ravenwolf herself doesn't really bring up the subject until her second big "how-to" book. (TO RIDE A SILVER BROOMSTICK being sort of her first one.) If you skimmed most beginning Wicca books, you'll likely see tons more spells to get you stuff entries than ones on how to live a compassionate, decent life....

So what I said I'd like to change was that sense that Wicca is mostly a "what do I get if I burn this particular color of candle" instead of a "how do I become a better person more in touch with the divine" kind of gig.

It was really nice and thoughtful and...

Hotmail seems to have eaten it.

Posted by tate hallaway at 10:10 AM No comments: