I just noticed that you can now pre-order Romancing the Dead on Amazon.com!!!! That means that I'm going to have to take some time this weekend to put up an excerpt on my website.

Oh, and I notice that Amazon.com is having one of those bargain price things for Tall, Dark & Dead again.

Posted by tate hallaway at 10:24 AM No comments:

Mercury turned retrograde on October 11 in the determined water sign Scorpio, encouraging you to revisit and explore your ideas and conversations. By October 23, Mercury re-entered Libra and fairness became the top priority. Now, the messenger planet turns direct in Libra on November 1, signaling that it is time to put everything you learned during the past three weeks into a cohesive plan of action. If you have done your homework, you will find yourself moving forward with confidence –- which is just what using a Mercury retrograde period is all about!

Certainly, confidence should be influencing your love agenda now. If you have been hesitant to make that first move, now is the time to abandon inhibition and let that crush know that you want to take things to the next level.

"Mummy Dearest" in the Star Tribune 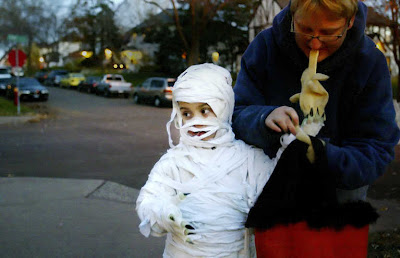 Here's a photo of Mason (and my alternate personality) that appeared in today's Star Tribune. There's on block on Sargent Street in Saint Paul that goes all out for Halloween -- every single house is done up and entire families (including their dogs) are dressed up. We stumbled across it on a tip from our dear friend Sean M. Murphy. I'd like to give credit to the staff photographer who took the photo (Jeffery Thompson), but the Star Tribune has the crappiest on-line search engine I've ever used.

New LINK! Here's a slide show that has lots of Mason pictures and some audio of me mentioning that his costume is "rotting.": http://www.startribune.com/slideshows/rich_media/1521515.html.

Just want to wish all y'all a happy Samhain.

Posted by tate hallaway at 8:38 AM No comments:

My high school English teacher used to have a quote by Ralph Waldo Emerson hanging on the bulletin board that baffled me for years. It read: "Foolish consistency is the hobgoblin of little minds." (Apparently, there's more to it.) I'm reminded of it, however, every time I receive a copy edited manuscript from my publisher.

That may sound like a dis on copy editors, but it's not meant as one. I say thank goodness for copy editors or my readers would have to spend all their time writing me angry letters complaining about all the little inconsistencies that riddle my work. No, it's my mind that doesn't suffer details very well. I apparently (mis)took Emerson's quote to heart and now my brain jettisons "little" consistencies. Ask my writers' group if you doubt me, but I'm lucky if I manage to spell my main character's name the same way throughout a five hundred page manuscript.

Even though I've always written books that are part of a series, I rely on my brain to keep track of the world-building details. I realize exactly how foolish this is, but I almost never re-read a novel once it's gone to press. Part of that decision is the fact that I'm usually deeply sick of the book during the process of getting it to publication. I've read and re-read the damn thing so many times (in draft, final draft, editorial revision, final revision, copy edited manuscript, page proofs, etc.) that the thought of looking at it again for even a second makes me cringe.

One of the reasons I don't look back at my earlier work in the same series is that I like the freedom that not-knowing-I'm-screwing-up affords. I should say that I've never violated a character's history with my cavalier attitude toward consistency, but my alternate personality messed up the time-line in the AngeLINK universe because a copy editor had corrected a date (to make it consistent with a presidential election year) and her brain had never made the "final edit," as it were. So the books following Archangel Protocol are actually off by two years. Only one reader noticed the mistake and she did because she was re-reading the books on the line-by-line level in order to write fanfic. Even so, I hope I get a chance to fix that at some point because it now bothers me.

You'd think, then, I'd learn, right? Not so. Since that mistake, I'm slightly more willing to do a quick word search through the electronic version of my final draft to check certain details, but I'm still fairly adamant about not letting a little thing like accuracy stop me from writing. I should clarify, however, that I'm only talking about little, harmless details. We all know that if a writer isn't careful and consistent with the important details, you can loose your readers. I even try to be pretty careful with what I call "blocking," which is to say whether or not a character is sitting or standing and what color shoes they're wearing — although I have a copy editor to thank for noticing a character's switch from combat boots to high heels.

God forbid something like that actually make it into print, but I rarely let those things worry me at the start. I write to get the story out and then sweat the details.

Or, later, thank the higher powers that a copy editor catches them.